αναδημοσίευση από τον Independent.co.uk
On the streets of Athens: 'If things get any worse, I won't be able to survive...'

For ordinary Greeks, the effects of austerity are becoming intolerable 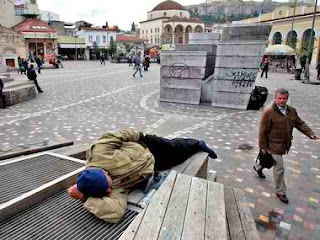 Maria Svoronou has three jobs and was finishing a 12-hour day as eurozone leaders were finalising Greece's rescue package in Brussels. For all her hard work, she earns only €870 (£730) a month and says that "if the situation gets any worse, I won't be able to survive".
Ms Svoronou, aged 33 and with a degree from Edinburgh University, has a job teaching film at a private college in Athens, for which she is paid €10 an hour. Her second job is teaching primary school children road safety; the third is translating the dialogue in Bugs Bunny cartoons from English into Greek for €1.60 a page. She likes all three jobs, adding: "I am better off than all those Greeks who are unemployed." But she is thinking about emigrating. Greece is full of well-educated but poorly paid people who expect their pay to drop further or to lose their jobs entirely.
In central Athens, mental health workers have occupied the Ministry of Health building, protesting that swingeing cuts are having a catastrophic effect on their patients' care.
The protesters point out that the suicide rate in Greece has risen 40 per cent because of the crisis in the latest period for which figures are available. Andonis Sakellaris, who works for the mental health department of the Ministry, says: "The people who are killing themselves include businessmen who have lost their assets and even teenagers who see no future for themselves." The suicide rate, once the lowest in Europe, is now the highest.
The 400 mental health workers taking part in the occupation mill about gloomily, chain smoking and playing cards. The police have made no attempt to remove them, but nobody is taking much notice of their action, which started on 9 February. Many work for state-funded NGOs that are about to go out of business while others are expecting their salaries to be cut further.
Markos Ephthimolous, who works with Alzheimer's victims, says: "Our average monthly wage is €900, which is being cut to €600, and you can only live on that for 15 days. Most of us have not been paid for three to five months and some got nothing at all in 2011." Health workers say the out-patient care they have been giving to people suffering from autism, schizophrenia and other mental illnesses, will soon be abandoned. "People will be sent back to mental asylums," says Antonis Dimakis, one of the leaders of the occupation. "We are going back to the Middle Ages." 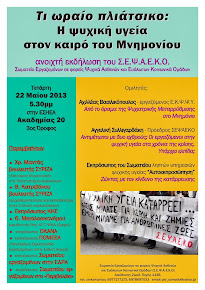